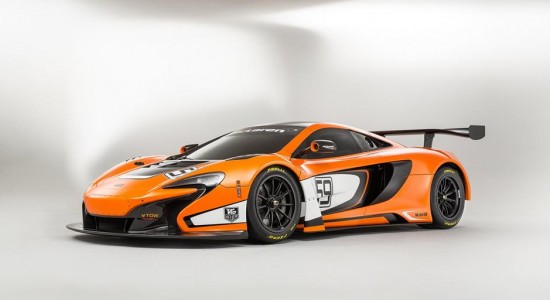 McLaren GT has today confirmed details of the McLaren 650S GT3 – the latest generation track-focused racer which will contest GT3 championships across the globe from the 2015 season.

Based on the recently unveiled McLaren 650S, and built around the same lightweight carbon fibre MonoCell chassis, the GT3 iteration has been honed using CFD technology and the latest in automotive and motorsport simulation to offer enhanced aerodynamics and improved levels of cooling. At the front, an aggressive splitter and larger air intakes dominate the purposeful new look, incorporating the familiar McLaren ‘face’ – albeit a more aggressive and menacing version, while on the flanks, the all-new lightweight carbon fibre bodywork wraps around reprofiled air intakes, which offer further optimised cooling. The fixed carbon fibre rear wing works in tandem with the large carbon fibre splitter to complete the management of air as it is worked across, through and beneath the sleek lines of the 650S GT3.

Reduced cost of ownership has been a priority during the design and development of the 650S GT3, and this has been achieved through extended component life, including increased engine and gearbox rebuild intervals, together with re-designed components and systems to reduce parts costs. The 650S GT3 is equipped with the latest generation of the 3.8-litre McLaren V8 twin turbo ‘M838T’ engine. Race-prepared and including a McLaren-developed ECU offering increased functionality to incorporate turbo boost and transmission shift control, the engine is coupled to an all-new six-speed sequential motorsport transmission. The 650S GT3 produces around 500PS – the same power as the 12C GT3, which is controlled by the FIA’s Balance of Performance (BOP) regulations.

Existing owners of the 12C GT3 are able to benefit from the updates and enhancements offered by the 650S GT3, due to the use of the shared chassis structure and engine. This upgrade package further extends the life of existing 12C GT3 cars allowing them to continue racing competitively through a second GT racing life cycle. For many McLaren GT3 owners this allows them to race their existing car for an average of six seasons.

Around 15 examples of the 650S GT3 are planned to be produced and delivered for the start of the 2015 season. With the optional upgrade package for 12C GT3, this could see an additional 15 cars running the new design from next season.