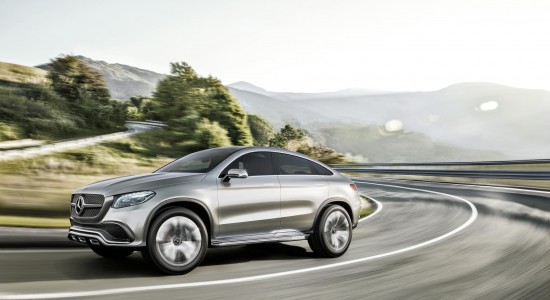 “Sensual as a coupé – visionary as an SUV,” is the succinct choice of words used by Gorden Wagener, Head of Design at Mercedes-Benz, to describe the physiognomy of the Concept Coupé SUV. With this new concept car Mercedes-Benz is raising the standard to a new, higher level in literally multiple respects. This extremely sporty study impresses as a typical representative of the long-standing coupé tradition at Mercedes-Benz, with a flowing sideline, stretched cabin and striking radiator grille with central chrome louvre. At the same time, the Concept Coupé SUV stands out with its muscular wings, large wheel arches, imposing 22-inch wheels, high beltline and generous ground clearance. Its dynamic handling on the road is also of a superior level. The variable dynamic control system “Dynamic Select Control” provides four fundamentally different transmission modes and an individually programmable setup.

The four-door, all-wheel drive Coupé has a length of almost five metres, and an imposing width of a good two metres thanks to its broad shoulders and flared wheel arches. At the same time, it has a modest height of around 1.75 metres, exhibiting the flat, extended roofline that is typical of a sports coupé. In line with a tradition and like all recent study vehicles, the Concept Coupé SUV is painted in the “Alu Beam” paint finish, which is also reminiscent of the technically ground-breaking Silver Arrows of the 1930s and 1950s. The return of the “nations cup”?