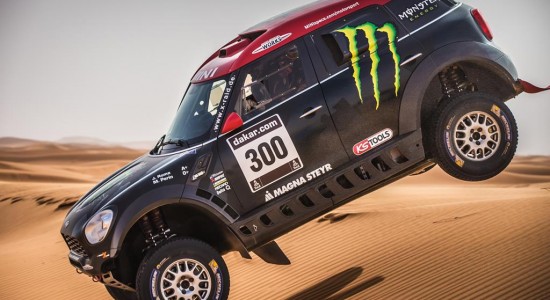 Less than two months ahead of the start of the 2015 Dakar Rally (3-17 January) X-raid, supported by MINI, has revealed its line-up for the 37th edition of the world’s most famous long-distance rally. A total of eight MINI ALL4 Racing with driver crews from ten countries will take on the ultimate motorsport adventure of the Dakar Rally. Defending Dakar champions Joan “Nani” Roma (ES) and co-driver Michel Périn (FR) will lead the Monster Energy Rally Raid Team while the experienced driver pairings Orlando Terranova (AR)/Bernardo “Ronnie” Graue (AR) and Krzysztof Holowczyc/Xavier Panseri (PL/FR) complete the line-up. There will also be five customer driver pairings in MINI ALL4 Racing cars built by the German-based X-raid GmbH.

Nani Roma and Michel Périn are aiming to defend their title in their black and green MINI ALL4 Racing. “Winning the 2014 Dakar Rally in the MINI ALL4 Racing was very special to me because it came exactly ten years after my first Dakar victory,” says Roma who also won the 2004 Dakar Rally on a motorcycle.

Terranova who finished the 2014 Dakar fifth overall will be in the red and black MINI ALL4 Racing. “My goal, of course, is to win the Dakar but also to be the first competitor under the age of 40 to win it. It is a big challenge but the MINI ALL4 Racing is very strong. So I am confident that I can successfully reach my goals.”

The NASCAR Championship Week is upon us!