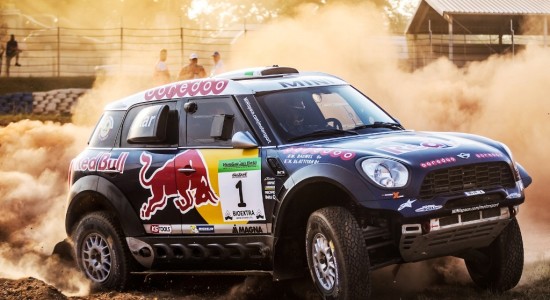 MINI ALL4 Racing crew Nasser Al-Attiyah (QAT) and Mathieu Baumel (FRA) won the Hungarian Baja 2015, a result that promoted Al-Attiyah to the top of the leaderboard in the 2015 FIA World Cup for Cross Country Rallies.

Al-Attiyah and co-pilot Baumel showed their competitive strength from the off by securing the fastest time in the opening Special Stage on Friday evening (14th August). This result placed their MINI ALL4 Racing at the front of the pack when the first of the weekend’s two main stages started on Saturday morning.

Although comfortably navigating dust trails and wooded areas interspersed with jumps and water trails, unbeknown to the crew of the flying MINI ALL4 Racing a rear brake disc broke. The resulting noise under braking was enough to force Al-Attiyah to slow his charge until the problem was discovered and rectified. Despite this, Al-Attiyah and and Baumel still managed to secure the Stage 2 win.

Sunday morning saw the start of the last stage and a planned cautious race pace by the experienced MINI ALL4 racing men. They were eventually rewarded by finishing second at stage result, but taking the overall race win by 14 minutes, 38 secs despite the addition of a 3 minute time penalty.

This latest win for MINI ALL4 Racing and Al-Attiyah now places MINI in the top two leading positions of the World Cup championship – Al-Attiyah leads with 180 points; Vasilyev is in second place with 171 points. The next round of the 2015 FIA World Cup for Cross Country Rallies is Baja Poland 27-30th August.