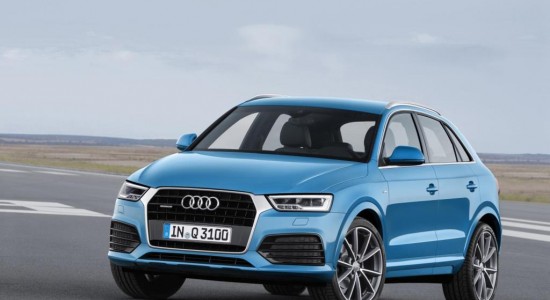 Whether in SE, S line or top flight S line plus specification, the premium character of the redesigned Audi Q3 for Europe is apparent with its coupe like lines and characteristic wrap-around tailgate.

This line-up features the 1.4-litre TFSI petrol engine with Cylinder-on-Demand technology which appeared first in the A1 and A3 ranges and makes its Q3 debut here. With 150PS and the option of either manual or S tronic twin-clutch automatic transmission, it gives the exclusively front-wheel-driven Q3 1.4 TFSI a 0-62mph sprint time of 8.9 seconds (S tronic) and yet also enables it to return up to 50.4mpg (manual) based on the combined cycle test. Above it in the petrol line-up is a 2.0-litre TFSI unit with power increased from 170PS in the outgoing Q3 to 180PS, which can be linked to either manual or S tronic transmission and is allied to quattro all-wheel-drive without exception.

Forming the diesel contingent are two four-cylinder TDIs with outputs of 150PS, up from 140PS in the equivalent previous generation Q3, and 184PS, up from 177PS.

Updated in line with the rest of the range, the RS Q3 compact performance SUV is now more purposeful than ever. Its 2.5-litre, five cylinder engine now produces 340PS and 450 Nm (331.9 lb ft) of torque. It also now satisfies the Euro 6 standard. The top model in the series now accelerates from 0 to 62mph in 4.8 seconds on its way to an electronically governed top speed of 155mph. An RS exhaust system with a switchable flap adds even more volume to the unmistakable sound of the five cylinder engine.