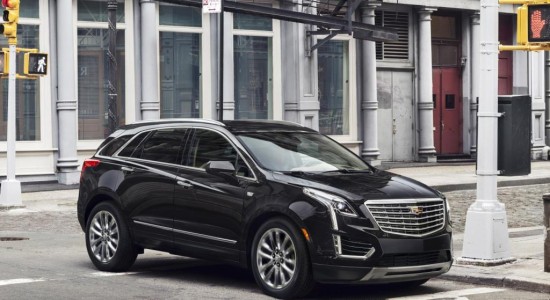 The first-ever XT5 premieres this month at the Dubai and Los Angeles auto shows and begins production in the U.S. and China in spring 2016. Cadillac crossovers will wear the “XT” designation, a key aspect of the brand’s product-driven global growth plan.

Rear-seat legroom is increased 3.2 in. (8.1 cm) in the XT5, compared to the SRX. The rear seat reclines and slides fore and aft, as well.

In the U.S. market, the 2017 Cadillac XT5 will be powered by the new 3.6-liter V6 engine. This engine has been completely redesigned and features Active Fuel Management cylinder deactivation technology, which allows the engine to seamlessly and automatically switch to a fuel-saving 4-cylinder mode under low or moderate loads. With an estimated peak output of 310-horsepower and 270 lb-ft of torque, the new V6 uses variable valve timing for strong response and smooth power delivery.

In China, the XT5 will be offered with a standard 2.0-liter four-cylinder turbocharged engine. Powerful, yet compact, the 2.0T also features Stop/Start technology.