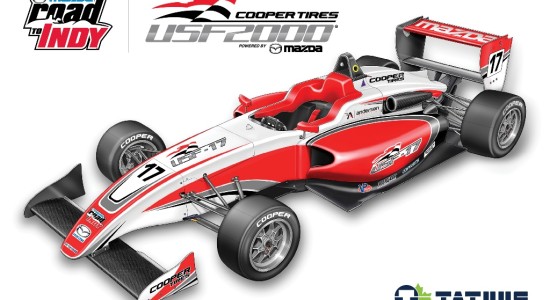 The state-of-the-art race car will serve as the foundation for a rejuvenation of the first two steps on the highly acclaimed Mazda Road to Indy – the Cooper Tires USF2000 Championship Powered by Mazda and the Pro Mazda Championship Presented by Cooper Tires – beginning in 2017.

Tatuus, headquartered in Concorezzo, Italy, has been producing top-quality open-wheel junior formula cars since 1980. Its FIA-approved composite chassis currently form the basis for the popular and successful Formula Renault 2.0 and Formula 4 categories.

The Tatuus USF-17 will replace the tube-frame Van Diemen/Elan chassis which has formed the backbone of USF2000 since its introduction in 1999. It will be mated to the proven Mazda MZ-R engine and Cooper racing tires and augmented by other modern features including a six-speed paddle-shift gearbox, a revised damper package, custom aluminum American Racing wheels, Cosworth data system, LCD steering wheel and ECU, a revised PFC brake package, and IndyCar-specific quick jack and roll hoop attachments.

Replica cars allowed in the U.S.