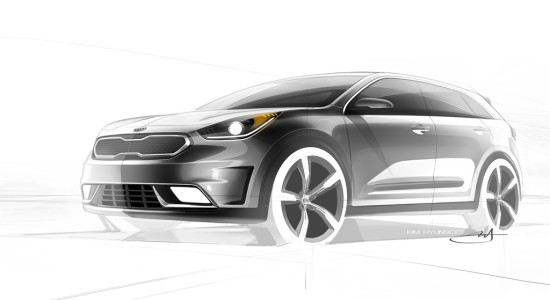 Kia has announced its plans to introduce an all-new low emissions vehicle to its growing model line-up. The Niro – labelled a Hybrid Utility Vehicle (HUV) – represents a new concept from the Korean car brand, and marks the development of Kia’s first dedicated eco-car platform. Sporting a compact SUV shape, the car’s designers highlight the most modern architectural designs and contemporary sculptural art as key inspirations behind the new HUV’s body. The vehicle boasts smooth, sleek proportions, while its relatively wide stance portrays stability and a low center of gravity. The Kia Niro will combine a stylish SUV design with greater fuel economy, with a target CO2 emissions rating of under 90 g/km (combined, based on the New European Driving Cycle). The car will achieve its ultra-low emissions levels and impressive fuel economy with a downsized hybrid powertrain, pairing Kia’s 1.6-liter ‘Kappa’ gasoline direct injection (GDI) engine (105 ps power output and 147 Nm of torque) with a 1.56 kWh lithium-polymer battery pack and 32 kW electric motor. The powertrain’s combined power output and torque will be applied to the road through a highly-efficient six-speed double-clutch transmission.

Kia also revealed details of a range of advanced new powertrains planned for the all-new Optima. A new addition to the Kia model line-up, the Optima Plug-in Hybrid (PHEV) will be Kia’s first plug-in hybrid for global markets when it goes on sale in the second half of 2016, offering increased battery capacity and pure electric range.