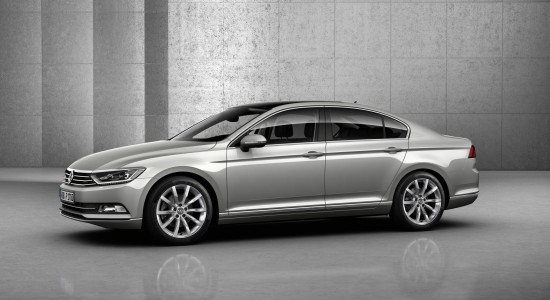 Volkswagen has unveiled the all-new Passat at a ceremony at the Volkswagen Design Centre in Potsdam, Germany. The latest car, which will receive its public premiere at the Paris Motor Show in October, is the eighth-generation of the Passat, which over the past 41 years has racked up over 23 million sales worldwide.

Everything in this car is new: design, technologies and engines. Unladen weight has been reduced by up to 85 kg and fuel economy figures that have been improved by up to 20 per cent. For the first time, there will also be a Passat with a plug-in hybrid drive system. At 4,767 mm long, the saloon is two millimetres shorter than the previous model, while the wheelbase is 79 mm longer at 2,791 mm and therefore the body overhangs significantly shorter. At the same time, the Passat is 14 mm lower at 1,456 mm, and 12 mm wider at 1,832 mm.

All models of Passat have LED rear lights, while the higher-specification versions feature a distinctive horizontal tail light signature that switches over to a vertically oriented brake light signature under braking. Headlights are halogen or LED. In conjunction with Dynamic Light Assist, one of the two LED headlight options automatically adjusts the beam for maximum illumination of the road without dazzling other traffic.

A highlight of the Passat’s new range of engines is a high-performance, four-cylinder, 2.0-litre, bi-turbo diesel delivering 240 PS and an extraordinary 500 Nm from 1,750 rpm. This engine will be available only with a new seven-speed DSG gearbox and 4MOTION all-wheel drive. A plug-in hybrid model will also be offered, with potential to travel 31 miles on battery power alone, and with a maximum range of around 600 miles. American drivers looking for glory on 4th of July weekend!