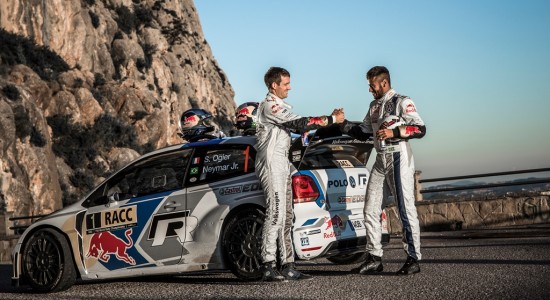 Two sports stars at the top of their game, the 315-hp Volkswagen Polo R WRC, and drifts aplenty: Brazilian football star Neymar Jr. met reigning World Rally Champion, Sébastien Ogier, for a thrilling test drive in the Polo R WRC. Neymar Jr. swapped his football shirt for racing overalls and took his place in the passenger seat as co-driver. His job for the day was to guide Ogier through the narrow, winding streets on mount Montserrat, near Barcelona.

A job that demands the utmost concentration and extreme speed, as the star striker soon discovered. Neymar Jr. did his very best to keep pace with the World Champion. Fortunately, Ogier knew the route like the back of his hand – hence his advice for Neymar Jr.: “Just sit back and enjoy the ride.”