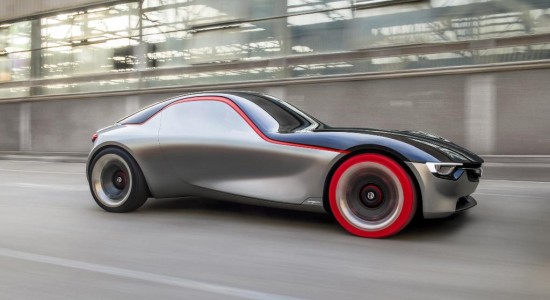 Vauxhall and Opel will reveal their vision of the future sports car with the GT Concept at this year’s Geneva International Motorshow (March 3-13).

While the GT Concept is forward-thinking, encapsulating Brit designer Mark Adams’ philosophy of ‘Sculptural Artistry meets Technical Precision’, its name mirrors that of the 1964 GT Concept, the first styling model to be produced by the nascent Vauxhall Design & Engineering Centre in Luton which opened the same year.

“We created the GT Concept to capture the bold, emotional spirit of both the Vauxhall and Opel brands,’ said Mark Adams, Vice President, Design Europe. ‘It is dramatic, sculptural and full of innovations, which is our great tradition that we intend to continue.”

A key innovation of the GT Concept is its large doors with integrated side windows that show a seamless transition from glass to painted surfaces. Both driver and front passenger gain access to the spacious interior after pressing a touchpad for the electric doors that is integrated in the red signature line of the roof.

The GT Concept’s front-mid engine configuration keeps the car’s center of gravity low and central for excellent dynamics. Beneath its stretched bonnet is a powerful 1.0-litre, three-cylinder turbocharged engine, based on the all-aluminum unit used in the ADAM, Corsa and Astra. Developing 145PS and maximum torque of 205Nm, the engine delivers drive to the rear wheels, via a six-speed sequential transmission operated by steering-wheel mounted paddle shift. Weighing under 1000kgs, the GT Concept accelerates from 0-62mph in less than eight seconds and on to a maximum speed of 134mph.