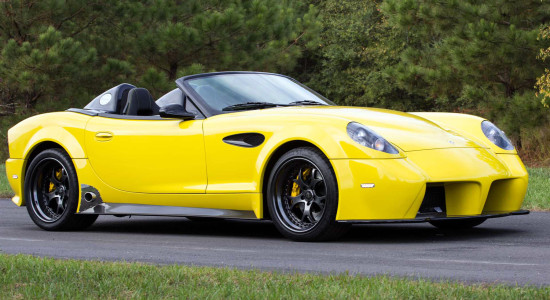 Panoz, the Georgia-based manufacturer of exclusive sports cars, is rolling into the 2015 Amelia Island Concours d’Elegance this week with its 25th Anniversary Edition Esperante Spyder and Spyder GT sports cars.

The new Esperante Spyder and Spyder GT sports cars commemorate the Panoz motorsports heritage and Panoz sports cars of the past 25 years. The company is building no more than 25 examples, intentionally limiting production to ensure they remain special and maintaining the company goal of creating America’s most exclusive, custom hand-built sports cars.

The Spyder GT also has other features that differentiate it from the Spyder, including its wide body carbon composite and aluminum panels, side exhausts like the Panoz Esperante GT2 race car, clear-coated carbon fiber front splitter, carbon fiber rear diffuser and side skirts, wider front and rear wheels, and Brembo brakes on all four corners. For those desiring more power, Panoz and Élan Power Products can custom build engines producing 800-plus horsepower.

Simona de Silvestro back in Indycar