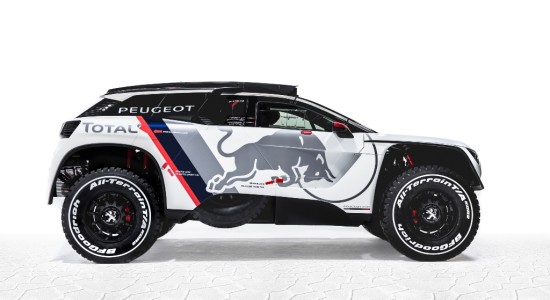 Coming off the back of a successful Dakar and Silk Way Rally campaign with the Peugeot 2008 DKR this year, Team Peugeot Total and Red Bull have revealed the new Peugeot 3008 DKR.

The all-new Dakar challenger is based on an entirely new model of Peugeot SUV, to be revealed at the Paris Motor Show, following eight months of intensive work in Velizy, France. The new Peugeot 3008 DKR remains loyal to Peugeot’s two-wheel drive philosophy.

“The new 3008 symbolises the next step, ” said team director Bruno Famin. “Our goal with this car was to take the weaker points of the existing car and make them stronger, while capitalising on all the existing strengths to improve them still further. There are also some new regulations, which we obviously needed to comply with.”

Sébastien Criquet is Peugeot’s senior exterior designer, responsible for the aggressive lines of both the new Peugeot 3008 DKR and the corresponding road car. The Dakar car’s dimensions and features are governed by technical rules laid down by the sport’s governing body, but its inspiration is still very clear through a number of unique design cues.

“Our new Dakar car is the most extreme expression of Peugeot’s latest SUV, ” added Criquet. “It keeps the distinctive design language of the road car, but transports it into a rally context. And that’s the dream job for any designer: when you create a car, you always have a competition version at the back of your mind.”

Peugeot Sport has ensured that the car’s 3.0-litre V6 twin-turbodiesel engine is even more driveable for next year’s Dakar, delivering greater torque at lower revs. Adding to the challenge for the engineers is the fact that the latest Dakar regulations have imposed a smaller restrictor on the engine (38mm as opposed to 39mm last year) with a net loss of around 20 horsepower. However, this power is now accessible from further down the rev range, meaning that the car is easier to drive and potentially even faster.