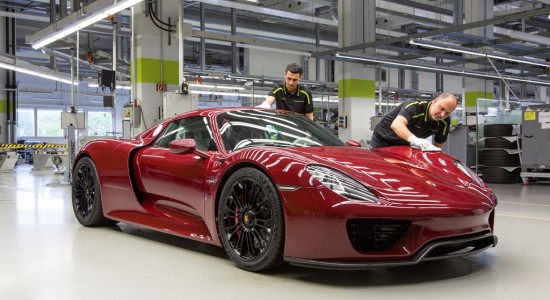 The final Porsche 918 Spyder came off the line in Stuttgart-Zuffenhausen according to schedule. But the legacy of this technology pioneer will reach far beyond its production time. Future generations of sports cars will benefit directly from innovations of the 918 Spyder.

The 918 Spyder was systematically developed to be a performance hybrid with plug-in technology. The hybrid super sports concept car made its debut at the 2010 Geneva International Motor Show where it met with overwhelming approval.

The car creates an important foundation for the hybrid drive of tomorrow in its thermal management concept that features five separate cooling loops and the innovative hybrid cooling of the rear electric motor with air and water. Another example with future implications: the Porsche 918 Spyder can convert far more kinetic energy into electrical energy than other hybrid vehicles because of its intelligent control of generator functionality and conventional brakes.