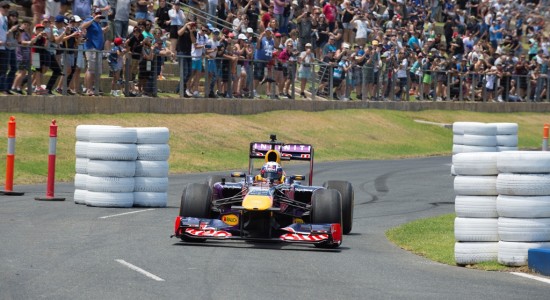 The season might be over but there was one final piece of Formula One business Daniel Ricciardo needed to complete before the brief Christmas break and that involved bringing a heady dose of F1 power to folks back home.

This week Daniel jetted back to his home city of Perth where he was set to appear at Sunday’s Perth Speedfest, a massive homage to all things motorized and fast. Before that though, Daniel and the showcar crew had a little surprise in store for the citizens of the Western Australian capital – taking the double title-winning RB7 out for a breakfast-time hoon around St George’s Terrace.

Daniel blasted between the lights of the CBD’s main drag three times before treating a shocked but thrilled crowd to some tyre-melting donuts. Speaking after his early morning dose of donuts, he said: “It’s obviously nice to be home for starters and to drive the RB7 through my city streets. It woke me up and certainly made the jet lag a bit easier to deal with! It definitely got me alert. It’s nice to bring such a show to Perth.”

The 8am burnouts were a teaser for Sunday’s main event, the first Perth Speedfest. The huge show featured more than 60 separate events across 25 different motorsport disciplines on five customised track layouts at Perth Motorplex.