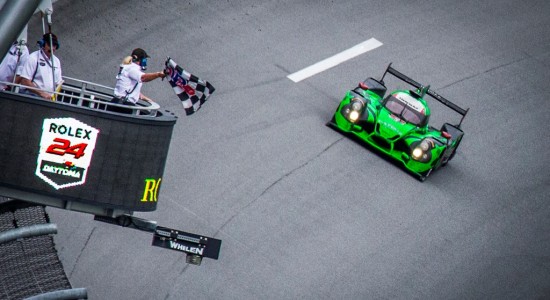 Under sunny Florida skies, 54 cars started the 54th edition of the Rolex 24 At Daytona.

Like it is always the case in Daytona the race wasn’t without drama. 21 cautions, 11 of those before the 10-hour mark, added to the excitement of the race, inaugurating the redeveloped Daytona International Speedway and beginning the IMSA WeatherTech Sportscar Championship.

The No. 2 Extreme Speed Motorsports Honda Ligier P2 was fast when Scott Sharp and Johannes van Overbeek were driving, but when they put 22 year old Pipo Derani behind the wheel, it turned into a rocket ship. He steered the car to victory lane a full 26 seconds ahead of the No. 10 Wayne Taylor Racing Chevrolet Corvette DP, which was ahead of the No. 90 Visit Florida Corvette DP. Gentleman driver Ed Brown, who helps finance the No. 2 Tequila Patrón-sponsored team, also drove a brief stint. “I have no words,” Derani said. “Just to be here, it’s kind of unreal. The last two and a half hours were pretty tough and intense, with the Taylor brothers pushing us hard. I have to thank my team for the great car they gave me.”

If that sounds anticlimactic, it was, but the excitement was more than compelling in the GT Le Mans class. Oliver Gavin and Antonio Garcia battled to the checkered flag in the two factory-backed Corvettes, with Gavin prevailing by a fender. Third was the No. 912 Porsche 911 RSR. In Prototype Challenge, the No. 85 ORECA-Chevrolet took the win by four laps, after having a 20-lap margin during the overnight. Driver Kenton Koch crashed on cold tires in the wee hours, but the big lead meant there was plenty of time to fix it.