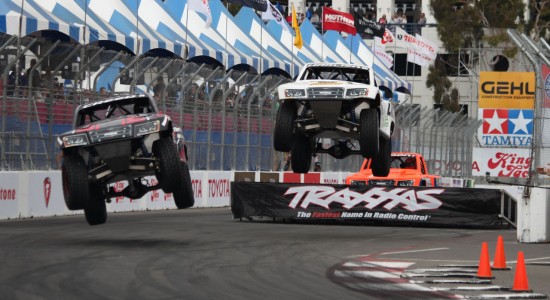 As the Citgo truck of Venezuela’s E.J. Viso and the TRAXXAS-sponsored truck of Sheldon Creed slammed each other heading into the final lap of the SPEED Energy Formula Off-Road Presented by TRAXXAS race at Long Beach, Robby Gordon watched the two leaders through his front window and inherited the win as both drivers took themselves out of contention.

The race was the IndyCar veteran Viso’s to win, as he led the most laps in his first-ever SST race. Creed always fast and aggressive, challenged Viso rather than be content to finish second, which resulted in the hard contact between the drivers.

“I saw what was going on in front of me and it was cool to see two great young drivers going hard and putting on a great show for the fans,” Gordon said. “That’s what’s great about these trucks – we can beat and bang and keep going which is what the fans want to see. It was great to have E.J. a part of the series and we know Sheldon is going to a great driver and one to keep an eye on for many years.”

The next stop on the 2014 series schedule will be in Indianapolis, Ind. May 23.