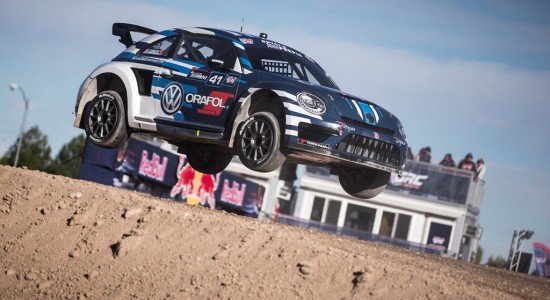 “I feel great!” Wiman, last year’s Supercar champion, said after the victory. “I’ve been waiting for this for almost 20 races. It’s unbelievable—I had a completely clean race with almost no mistakes, and that’s how you win races.”

Inclement weather caused the event to take place on a wet track. Steve Arpin won the pole in qualifying, but Wiman took the semifinal victory to earn lane choice for the 10-lap main event.

Speed, who won the second semifinal, grabbed the lead on the start of the 10-lap main event, but Wiman muscled by him during contact between multiple cars that left fellow championship hopeful Tanner Foust’s car damaged and unable to mount a successful run for the title. Wiman would never relinquish the lead, while Speed maintained the third spot to earn the championship over Volkswagen Andretti Rallycross teammate Foust, who finished ninth and off of the lead lap.