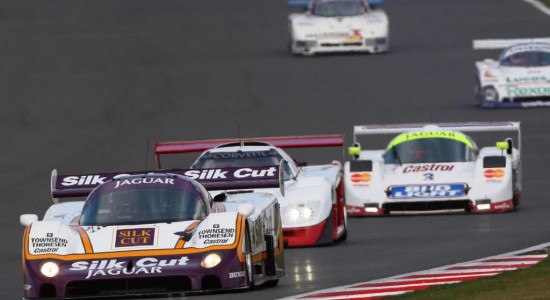 Highlight of the weekend, the FIA Masters Historic Formula One field stunned the huge Sunday crowds with one of the most intense battles the series has ever seen. In the opening laps the race one winning #55 Fittipaldi F5A of Ollie Hancock held station at the front of the pack as an out-of-position Michael Lyons carved through the order from 13th on the grid. Within a couple of laps Lyons’ Hesketh was with the leading group, as Hancock came under pressure from Martin Stretton in the Tyrrell 012 and the Arrows A4 of Steve Hartley. Lyons’ car then appeared to suffer some mechanical issues and he couldn’t make further progress, but ahead Hancock, Stretton, Hartley and the Williams of Christophe D’Ansembourg were trading places at almost every turn. Stretton managed to pull out a couple of seconds, and despite the best efforts of Hartley, who set the fastest lap in the final few minutes of the race, held on to take a stunning victory.

The superlative Group C Endurance cars saw the Mercedes C11 dominating the weekend. In the hands of Bob Berridge it led from lights-to-flag. Behind the Silver Arrows was Justin Law’s Jaguar XJR8, which took the position from Steve Tandy’s Nissan R90 at mid-distance. Another Nissan looked set for a podium place, as the R90CK of Katsu Kubota (second in the Saturday race) surged through the field before a spin put him out of contention.