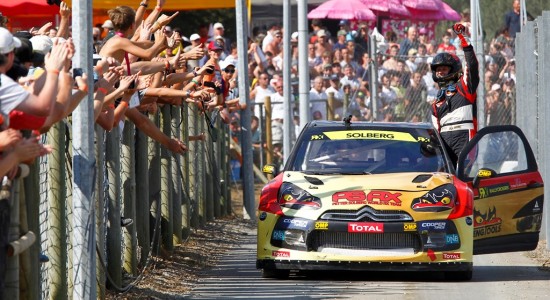 Norway’s Petter Solberg took a sensational victory at World RX of France, round eight of the FIA World Rallycross Championship presented by Monster Energy. The result marks the third win of the season for PSRX driver Solberg as the former WRC Champion extends his lead at the top of the overall World RX standings. Ford Olsbergs MSE driver Reinis Nitiss and Team Peugeot-Hansen’s Timmy Hansen finished second and third respectively.

More than 70,000 fans were present at Loheac in north-west Brittany over the weekend to watch 79 cars battle it out across the Supercar plus the Super1600 and TouringCar categories. As well as an experienced field of 32 French drivers, the line-up in France also included star-studded names such as American Gymkhana star Ken Block who made his second appearance in World RX – and finished fourth.

“I’m tired, exhausted, sweaty and happy – this has been an unbelievable weekend,” grinned Solberg who is a likely contender of becoming the first double winner of two FIA World Championships.

In the Super1600 FIA European Rallycross Championship category which fielded 33 cars this weekend, Frenchman Steven Bossard won in front of a delighted home crowd. Russia’s Nikita Misyulya finished second while France’s Andrea Dubourg made it a double podium for the local drivers. Sergej Zagumennov finished fourth and remains at the top of the S1600 standings.

Norway’s David Nordgaard racked up four heat wins and went on to take the win in the TouringCar category at the wheel of a Ford Fiesta. Daniel Lundh and Anders Braten finished second and third respectively. Lundh continues to lead the series.

Round nine of the FIA World Rallycross Championship will take place at Estering in Germany in two weeks time (20-21 September). New Focus on sale in Europe from November