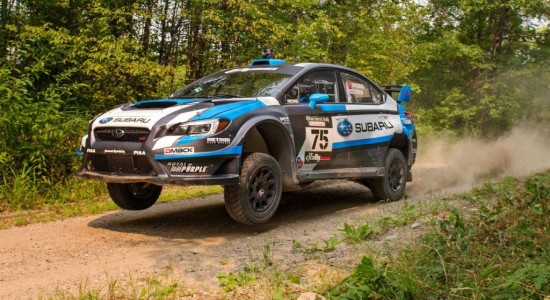 Reigning Rally America Champion David Higgins continued his march toward a perfect, undefeated season with a victory at the 2015 Ojibwe Forests Rally in northern Minnesota.

Higgins, with co-driver Craig Drew fended off their hard charging Subaru teammate Travis Pastrana, with co-driver Chrissie Beavis, who settled for second. The victory was Higgins’ seventh consecutive win this season at the wheel of his DMACK Tires-shod 2015 Subaru WRX STI rally car. Higgins has just one round remaining, the Lake Superior Performance Rally (Oct. 16-17), in his bid to be the first driver since rally legend and current Subaru team manager John Buffum completed the last perfect season in the USA in 1987.

Higgins victory was anything but easy after his weekend got off to a rocky start with a tire puncture that cost him over a minute to Travis Pastrana. But with a masterful display of driving Higgins went flat-out on the three night stages Friday evening and clawed back his time deficit and then some, leapfrogging into the lead, where he stayed for the remainder of the weekend.