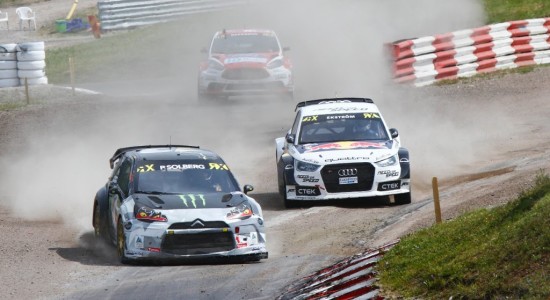 The FIA World Rallycross Championship presented by Monster Energy will resume after a short summer hiatus as the teams cross the Atlantic for Canada RX, round seven of the 13-event calendar. A total of 20 Supercars will compete at Trois-Rivieres as well as eight RX Lites in the standalone RX Lites Intercontinental Cup. Reigning Champion Petter Solberg continues to lead the Drivers’ Championship, 44 points ahead of Johan Kristoffersson.

Joining the World RX regulars in Canada will be two local drivers, Patrick Carpentier and LP Dumoulin, both piloting JRM Racing-prepared MINI RX Supercars. Carpentier caught the eye on his RX debut in 2014 when the five-time IndyCar race-winner finished sixth overall. “I loved the event last year,” reflected Carpentier, before adding: “I analyse World RX for Canadian TV and I was pleasantly surprised when the JRM car made the final in the recent UK round. That was really impressive and hopefully we can make the final again in Canada.”

Despite his experience behind the wheel as the reigning Canadian NASCAR Champion, Dumoulin is new to rallycross and admits the level of competition will be tough. “Of course I want to be up front, do well and be part of the final but, with all the respect I have for the other teams and drivers, my expectations are to show up, work with JRM and try to get the chemistry going quickly,” he explained.