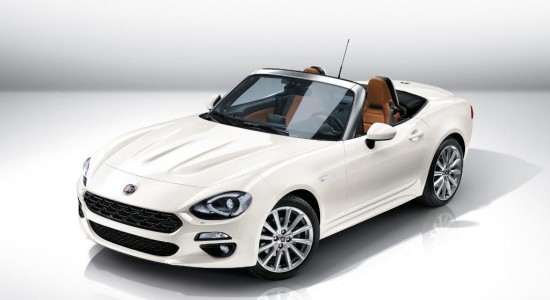 Almost 50 years since the original was introduced, the FIAT 124 Spider is back!

Designed at Centro Stile in Turin, Italy, the new FIAT 124 Spider takes its inspiration from the 1966 original, not only in terms of its proportions and stance but also in terms of its detailing. A horizontal line emerges from the front wing, kicking up over the rear haunch and flowing toward the tail lamp, aping the distinctive bodywork of the original car, while the style and position of the LED headlamps, and the hexagonal upper grille, both draw heavily from the details of the classic roadster.

The bonnet of the new sports car also emulates the twin power domes of the second- generation FIAT 124 Spider (a functional design feature necessitated by the fitment of larger engines) while the rear view is defined by two main features: the “seagull” wings, the upper surface of which fall inward toward the decklid, and the sharp horizontal tail lamps, which incorporate a new FIAT stylistic sign of body-coloured inserts launched with the  new FIAT 500. An integrated rear spoiler enhances the aerodynamic performance of the new FIAT 124 Spider, while twin exhaust outlets underline the performance capability of the engine.

This attention to detail extends even as far as the operation of the soft top, with spring-assisted opening and closing – eliminating the need for a power assist system – and automatic window lowering and raising when the header-rail lock levers are operated.