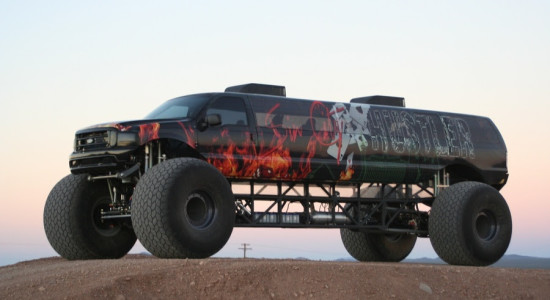 Big Toyz Racing Motors (BTR), the premier custom fabricator of the world’s longest monster truck and luxury 4×4 vehicles, announced today that the Sin City Hustler the world’s first and only million dollar monster truck is now being made available to the public.

This one-of-one Ford Excursion monster truck features top of the line parts and was hand-built from the ground up by BTR’s racing team.

“We spared no expense when it came to building the Sin City Hustler,” said Brad Campbell, Owner of Big Toyz Racing Motors. “From its custom 521 cubic inch big block motor and hand built chassis, to its killer design with hundreds of one-off billet parts and show quality paint, this one-of-a-kind monster truck is nothing short of spectacular.”

An engineering feat, the million dollar monster truck was built by hand; it measures approximately 12 feet tall, 32 feet in length and weighs in at 15,000 pounds. This 4-wheel drive behemoth has a custom parts list a mile long and features a Ford big block motor capable of pushing out over 700 horsepower. In addition to the Excursion’s massive performance numbers, this tricked out truck features a fully custom built race spec DOM tube chassis and custom suspension that makes it virtually unbreakable and up for the challenge on any terrain.