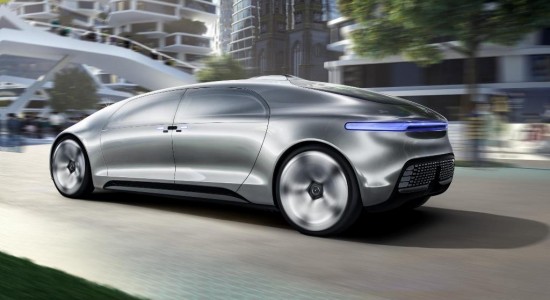 The new research vehicle of Mercedes, the F 015 Luxury in Motion, has its world premiere at the Consumer Electronics Show in Las Vegas, and provides a concrete example of the visionary ideas the company is developing with regard to autonomous driving of the future.

“Anyone who focuses solely on the technology has not yet grasped how autonomous driving will change our society. The car is growing beyond its role as a mere means of transport and will ultimately become a mobile living space,” explains Dr. Dieter Zetsche, Chairman of the Board of Management of Daimler AG and Head of Mercedes-Benz Cars.

It is obvious that the F 015 represents the vision of a brand new vehicle concept just from its unusual proportions (length/width/height: 5220/2018/1524 millimeters), its seamless, monolithic exterior and its large LED light modules at the front and rear. A range of different lighting functions can be provided through these LED fields. At the same time, the vehicle communicates and interacts with the outside world by means of the LED fields. These LED fields show for example, if the F 015 is driving autonomously (blue) or is controlled manually (white).

The pivotal feature of the innovative interior concept is the variable seating system, with four rotating lounge chairs that allow a face-to-face seat configuration. In order to make getting in and out of the car easier, the electrically powered seats also swing outwards by 30 degrees as soon as the doors are opened. If necessary, the driver and front-seat passenger can also turn their eyes and attention towards the front – a prerequisite for manual driving. To this end the steering wheel extends automatically from the dashboard. Even now, vehicles from Mercedes-Benz are capable of detecting many different hazardous situations out on the road and reacting as the situation demands. In August 2013, Mercedes-Benz demonstrated to great effect that autonomous driving is possible now, even in complex urban and rural traffic situations. Last year Mercedes-Benz became one of the first automotive manufacturers to be issued with an official license by the US state of California for testing self-driving vehicles on public roads.