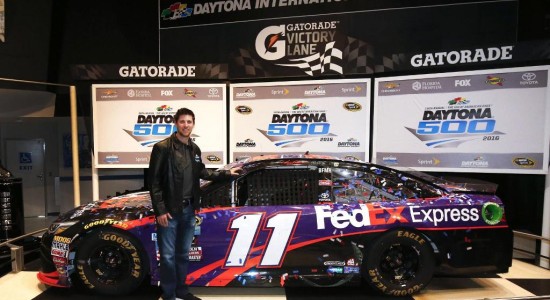 Toyota Camry driver Denny Hamlin won NASCAR’s biggest race – the Daytona 500 – when he finished first in Sunday’s 2016 NASCAR Sprint Cup Series (NSCS) season-opener at Daytona International Speedway. Hamlin earned his first-career Daytona 500 victory and the first for Toyota in the prestigious event which is second to only the series championship, which another Toyota driver Kyle Busch won in 2015.

Hamlin crossed the finish-line in his Joe Gibbs Racing No. 11 FedEx Camry by 0.010-seconds ahead of fellow Camry driver and second-place finisher Martin Truex Jr., marking the closest finish in the 58-year history of the Daytona 500. With the victory, Hamlin is also locked into this year’s Chase championship playoff.

“This is a team victory,” said Hamlin. “My teammates did an amazing job all day working together – all the Toyotas. This is a proud moment for everyone at Toyota. This wouldn’t be possible if this wasn’t Toyotas sticking together all race long. We were able to get up, capture our track position. This is amazing for Toyota.”

The 2016 season marks Toyota’s 10th season competing in the Sprint Cup Series, NASCAR’s top level, where Camry drivers have won 80 events since joining the series in 2007. Last year, Busch won the first NSCS championship for the manufacturer and Toyota drivers won 14 races, tying the most by Camry racers in a single-season.