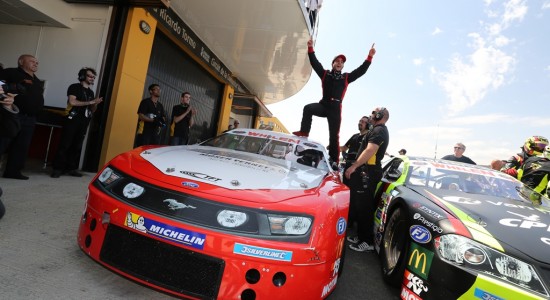 After winning the Jerome Sarran Trophy last year, Yann Zimmer (#3 TFT – Moser Vernet Ford Mustang) began his 2014 campaign with an outstanding win in the ELITE 1 Saturday Race at the Circuit Ricardo Tormo in Valencia. The Swiss made a brilliant move in the final minutes of the race, overtaking both Bert Longin (#11 PK Carsport Chevrolet SS) and Anthony Kumpen (#24 PK Carsport Chevrolet SS) in turn 2 and defending the lead from their comeback to inaugurate the first edition of the Valencia NASCAR Fest in perfect NASCAR style with his second career win.

Neal Van Vaerenbergh (#11 PK Carsport Chevrolet SS), 17 years old from Belgium, scored his first NASCAR win on his debut in the NASCAR Whelen Euro Series in the ELITE 2. The Belgian rookie, coming from single seater, started from the pole but was overtook at the first corner by Nicolò Rocca (#25 Caal Racing Chevrolet SS), racing both divisions here in Valencia. He then retook the lead at around one third of the race when the Italian went wide in turn one. Rocca crossed the finish line in second and the third place went to another Italian debutant: Marsilio Canuti (#7 TFT – Leclerc Chevrolet SS).

On Sunday Van Vaerenbergh made it two in a row, leading the entire race ahead of Wilfried Boucenna (#33 Overdrive Chevrolet SS). Marsilio Canuti (#7 TFT – Leclerc Chevrolet SS) came home third for his second podium of the weekend.

The NASCAR Whelen Euro Series returns to action on June 7-8 at Brands Hatch, England, for the second edition of the American SpeedFest. More on the NASCAR Whelen Euro Series on RACE GLOBALMAG!