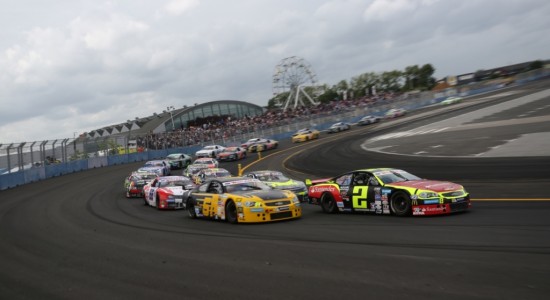 Ander Vilarino (#2 TFT-Banco Santander Chevrolet SS) won the Knauf 75 at the Tours Speedway. The Spaniard overtook last-year winner Frederic Gabillon (#12 Still Racing Chevrolet Camaro) with 15 laps to go in the 75-lap race on the French short-track and held on in a green-white-checkered finish to take his first win ever on an oval track. It is third win of the season and the 16th of his NASCAR career. “This win is special because it came on an oval and NASCAR means oval racing all over the world, I feel like a Sprint Cup Series Champion winning his first Daytona 500,” said Vilarino. Poleman Eddie Cheever III also passed Gabillon and climbed to the second position.

Mathias Lauda (#66 DF-1 Racing by B66 Chevrolet SS) won the first ever NASCAR Whelen Euro Series oval race in the wet! The Austrian committed to the outside line in a late restart to move from fourth to second and passed, again on the outside, Ander Vilarino (#2 TFT-Banco Santander Chevrolet SS) in turn 1 with 9 laps to go in the MICHELIN 75. “I felt good in the rain and I got more and more confident. I tried to save the tires in the first part of the race, then I started attacking and after the last restart I found out that the outside line was the fastest. I’m very happy for my first win in NASCAR”. Vilarino held on to take the second place under the checkered flag and increase his lead in the championship standings to 9 points over Anthony Kumpen (#24 PK Carsport Chevrolet SS), who finished 8th. On the podium went also Victor Guerin (#82 Brazil Team Chevrolet SS), who started 18th and climbed up to sixth in just two laps.

The NASCAR Whelen Euro Series regular season will end in Germany, at the Nurburgring, on July 19/20. Montoya wins in IndyCar after 14 years!