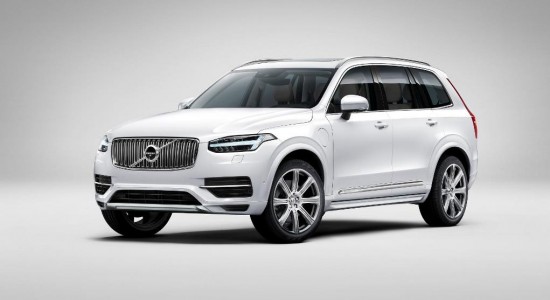 Three years in the making and part of a 11bn dollars investment programme, the new XC90 marks the beginning of a new chapter in Volvo’s history, capturing its future design direction, incorporating its own range of new technologies and utilising its new Scalable Product Architecture (SPA) technology.

The new XC90 will be the first of its cars to carry the company’s new more prominent iron mark, which has the iconic arrow elegantly aligned with the diagonal slash across the grille. Together with the T-shaped “Thor’s Hammer” DRL lights, the iron mark introduces an entirely new, distinctive and confident face for Volvo’s forthcoming generation of cars. To add more visual muscle from the sides, the XC90 comes with a range of wheel sizes up to 22 inches.

The new XC90 offers a range of two-litre, four-cylinder Drive-E powertrains. The top of the range XC90 Twin Engine, which combines a two-litre, four-cylinder supercharged and turbocharged petrol engine with an electric motor, offers an combination of power and clean operation: around 400 horsepower with CO2 emissions of around 60 g/km (NEDC driving cycle).

The XC90’s interior is the most luxurious to have been designed for a Volvo. The most striking feature is a tablet-like touch screen control console, which forms the heart of an all-new in-car control system. This system is virtually button free and represents an entirely new way for drivers to control their car and access a range of Internet-based products and services.