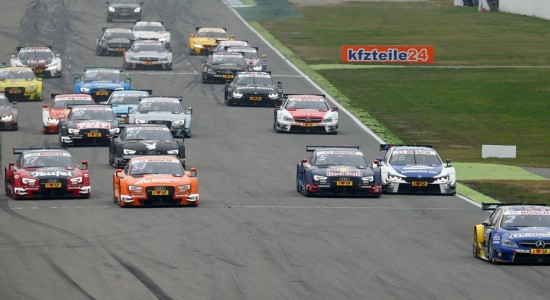 In the DTM finale at the Motodrom, Jamie Green ended the season just like he had started it back in May: with a race win, his fourth of this year. The Audi driver dominated proceedings in the 18th DTM race of the season and after 39 laps, he crossed the finish line as the dominant winner, accompanied by the traditional fireworks display.

Out in front, Jamie Green drove an almost solitary race. Behind the winner, many thrilling duels provided plenty of action: next to Edoardo Mortara, who had started the race from 13th place on the grid and was able to finish on the podium, Paul Di Resta also made up numerous positions. The Scot, who finished fourth in the race as the best-placed Mercedes-Benz driver, worked his way up from eleventh place on the grid. Bruno Spengler even managed to make up twelve positions in the race: the BMW driver made progress from 19th on the grid to finish seventh.

While champagne was sprayed at Mercedes-Benz for the newly-crowned DTM champion Pascal Wehrlein on Saturday already, BMW decided the battle for the manufacturers’ crown in its favour in the final stages. Maxime Martin, António Félix da Costa and Bruno Spengler in sixth to eighth place and Martin Tomczyk in tenth position scored the decisive points that allowed the brand from Munich to win the manufacturers’ title.