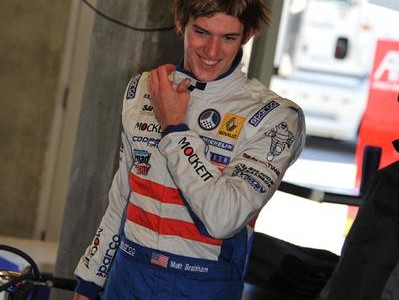 The Brabham’s dynasty seems to be able to offer another super-champion: after the win in the 2013 Pro Mazda and 2012 USF2000, Matthew Brabham will race in Indy Lights for Andretti Autosport as yesterday he totaled 86 laps in two sessions during his debut test in Sebring.

“It’s definitely a step up compared to Pro Mazda,” said Brabham, who turns 20 on Feb. 25. “So far it’s been challenging to get used to more power and more grip, but fun to drive. I’m slowly getting there, and it should be a good year for us.”

It was Brabham’s second outing in the car as he prepares for the third rung of the Mazda Road to Indy ladder. Teammate Zach Veach topped the combined time sheet on the 1.68-mile circuit, followed by 2013 series championship runner-up Gabby Chaves in a Belardi Auto Racing car and Brabham. The best lap times of the top eight drivers were less than a second apart.

“It gives us a jump up on everybody, and that definitely helps,” he said. “That’s what we did last year (in Pro Mazda). We got ahead and managed to sort things out before everybody else did. It’s great to get out early and nice to have everything signed so I can just focus on testing and getting comfortable before we go out and start getting ready for the racing season.”

The season starts March 30 on the streets of St. Petersburg, Fla., as part of the Firestone Grand Prix of St. Petersburg. Other full-scale tests are scheduled for late February at New Orleans Motorsport Park and Barber Motorsports Park.

For driver and crew, sorting out variables created by the switch from Firestone Firehawks to Cooper tires is an important aspect of the early testing program.

“That’s a big challenge for us,” Brabham said. “We have to re-do all the setups and rethink our theories a bit.”

For Brabham, who made his karting debut in June 2001 in Australia, the Mazda Road to Indy is a proving ground with long-term benefits.

He set Pro Mazda single-season records with 13 victories (seven in a row), 15 podiums, 10 poles and 13 fastest race laps while driving for Andretti Autosport. The teen, who before the season was named a British Racing Drivers’ Club “Rising Star,” led 81 percent of the laps over the 12 races.

A year earlier, he earned the USF2000 championship and rookie of the year award with four victories and seven other podium finishes competing for Cape Motorsports with Wayne Taylor Racing. Brabham earned a Team USA Scholarship to compete in three British Formula 2.0 races in the offseason.

“I haven’t seen so far a ladder system, a group of series around the world, that has the scholarship programs that move people up each individual step of the ladder,” the grandson of Formula One World Champion Jack Brabham and son of Indianapolis 500 competitor Geoff Brabham. “For me it’s been huge coming in my first year a winning the USF2000 championship and being able moving up to Pro Mazda and then to Indy Lights.