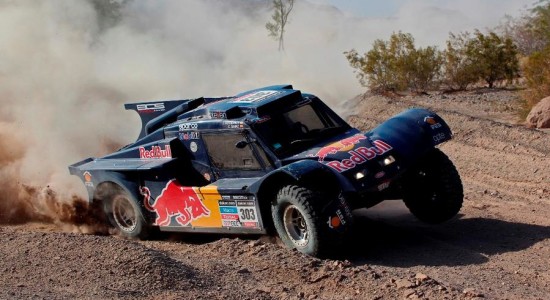 The Spaniard went flat out from beginning to end to take his 26th Dakar win. No-one was able to match Sainz’s pace, with second place going to an astonishing Stéphane Peterhansel, who never gave up despite multiple punctures, and third place going to another daredevil, Nasser Al-Attiyah, 13′19″ back.

The loser of today’s stage was none other than Nani Roma, who lost the overall lead after finishing fourth, 14′08″ behind his rival from Madrid … But Roma is still very much in the race, second, 2′06″ behind Sainz. The narrow gaps at the top, with Al-Attiyah at 6′56″ and the fiery Terranova at 13′08″, set the stage for a clash of titans, with Peterhansel (fifth at 18′10″) ready to bounce back into the fray.

Speaking after the stage, Stephane told us what sets this year’s race apart: “The feeling is that this Dakar is more complicated and harder for everybody. Last year the longest stage was about four hours and 40 minutes, today’s stage was around five hours and 25 – every day is so hard and I think the gap between the cars will be bigger this year. Tomorrow we will be close to the mountains and again it is a very long stage with the neutralisation in the middle. That will give us a chance to have some food and drink in the car and then go again, it is always complicated but tomorrow is not going to be easy.”