Cooper Tire Europe has signed a three-year agreement with the FIA World Rallycross Championship presented by Monster Energy which will see the tyre manufacturer supply its tyres to drivers on all 12 rounds of the all-action Championship.  World RX, which is promoted by IMG Motorsport, has made a number of significant announcements over the past few months including the signing of former Formula One World Champion Jacques Villeneuve and several broadcasters who are set to air race action live to fans across the globe.

Cooper, along with its sister brand – Avon Tyres – is the rallycross tyre of choice for competitors across the world, having supplied tyres to European Rallycross Champions for the past two decades.  In addition to World RX, Avon Tyres is also exclusive tyre supplier to the French Rallycross Championship, an agreement which began in 2013 and is set to last a further two years. Martin Anayi, Managing Director of FIA World Rallycross Championship for IMG Motorsport, welcomed the Championship’s newest partnership: “We’re extremely excited about the inaugural World RX season and we’re thrilled to have Cooper on board for the next three years.” 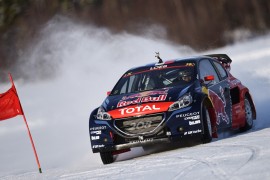