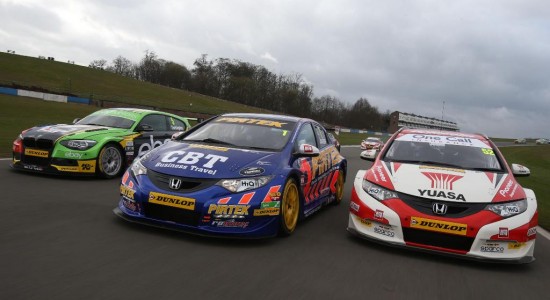 The Dunlop MSA British Touring Car Championship has confirmed a huge 31-car grid for the forthcoming 2014 season (when all BTCC machines will run to NGTC specifications for the very first time).

Not only does this year’s grid boast incredible strength in numbers, but the NGTC rules have also significantly aided the diversity of cars now seen on the entry list. 14 models from 11 different manufacturers will be represented in 2014, with the total number of cars on-track expected to be the largest in the series’ 2-litre history.

Adding to the impressive numbers and variety in the 2014 line-up, a quality field has also been further enhanced with seven champions making the grid, and a further five drivers having already won BTCC races.

The BTCC field will include an unprecedented seven champions in its ranks, headed by reigning supremo Andrew Jordan who took his maiden title during the 2013 season.

The two biggest announcements in the off-season proved to be the return of two double-champions in Alain Menu and Fabrizio Giovanardi. Menu, a legend of the much loved Super Touring-era will be driving a VW Passat for Team BMR this time around, whilst Giovanardi will be spearheading the challenge from Airwaves Racing.

This year’s Dunlop MSA British Touring Car Championship will again comprise of 30 races across ten events at nine venues around the UK, with the season commencing at Brands Hatch on 30/31 March and concluding on the legendary Grand Prix circuit at the same venue on 10/11 October.