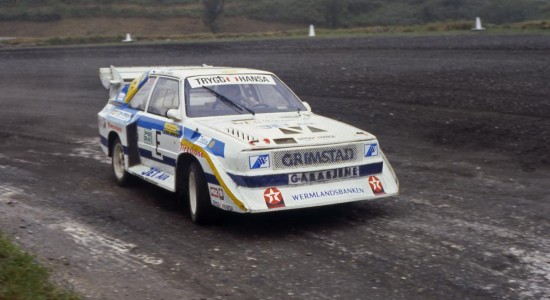 Special races and displays featuring sensational cars from the legendary Group B era will help celebrate the UK’s first ever round of the new FIA World Rallycross Championship. The milestone Autosport World RX of Great Britain extravaganza takes place at the historic Lydden Hill circuit in Kent over the Spring Bank Holiday weekend (24-25 May).

Originally introduced in 1982 to compete at the forefront of international sport, the exotic Group B formula spawned some of the quickest and most technically sophisticated rally cars ever created in what’s remembered as a golden age. However, such was their incredible speed that these awesome Group B supercars were swiftly outlawed from world class rallying at the end of 1986 following a series of fatal accidents.

Far from being the end of the road for these ferociously fast extreme machines, many quickly found a new home in rallycross where, with a more flexible rulebook, they continued to be developed. Now many of the greatest Group B rallycross monsters from that generation will be back in spectacular action for some thrilling invitation races at Lydden. Discovery Vision Concept to be unveiled in New York

Subaru Outback to debut at NYIAS