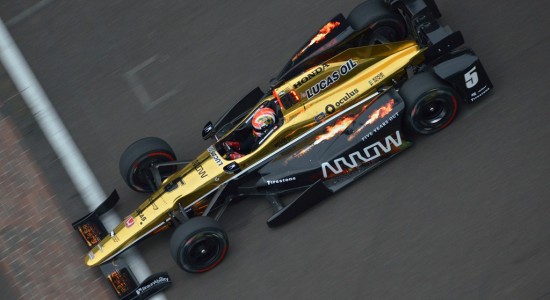 Armed Forces Pole Day at Indianapolis Motor Speedway had it all as starting positions were set for the historic 100th Running of the Indianapolis 500.

James Hinchcliffe, who nearly lost his life at the same track a year ago in a crash during Indianapolis 500 practice, put together a scintillating four-lap run of 230.760 mph as the final driver of the day in the Fast Nine Shootout. It allowed the Canadian fan favorite to claim the Verizon P1 Award and $100,000 prize for earning the pole position and the right to lead the 33-car field to the green flag to start the epic race May 29.

Driving the No. 5 Arrow Schmidt Peterson Motorsports Honda, Hinchcliffe collected the first pole of his Verizon IndyCar Series career in what will be his 79th race, edging Josef Newgarden for the honor by a mere 0.0407 of a second over the 10-mile run.

“I came into this month hoping we’d have a new story to talk about after what happened last year and I think we did it,” an emotional Hinchcliffe said on pit lane. “I can’t believe it. I’m honestly at a loss for words, which everyone knows is rare for me.

The legendary 100th Running of the Indianapolis 500 is set for May 29.