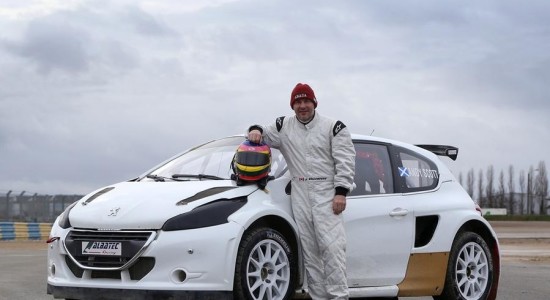 The new-for-2014 FIA World Rallycross Championship presented by Monster Energy has added a former Formula 1 World Champion to what is an increasingly competitive driver line-up for its inaugural campaign, with Jacques Villeneuve signing up to compete in an Albatec Racing-prepared Peugeot 208.

The 42-year-old has committed to a full season with the Dumfries-based squad, which has experience of fielding ‘big name’ drivers after running FIA World Rally Championship star Kris Meeke at Lohéac in France last year and testing erstwhile Ferrari ace Mika Salo in a private session in Finland.

Villeneuve will pilot one of the team’s fearsomely fast 600bhp Peugeot 208s, and Martin Anayi, Managing Director of FIA World RX for IMG Motorsport ¬– a division of IMG, the global sport, fashion and media company – welcomed the announcement as another major endorsement of the nascent Championship’s burgeoning profile and popularity.

“I am really looking forward to entering the rallycross arena with Albatec Racing,” said Villeneuve. “With my previous ice-racing experience, I’m excited about driving sideways in a 600bhp, four-wheel-drive Peugeot 208 over the combination of loose and tarmac surfaces, not to mention the jumps. With the added incentive of it being an FIA World Championship, the opportunity was really too good to miss.“

The opening round of the 2014 FIA World Rallycross Championship will take place at Montalegre in Portugal over the weekend of 3/4 May, with Villeneuve set to entertain his home fans at Trois-Rivières in Québec on 7/8 August.