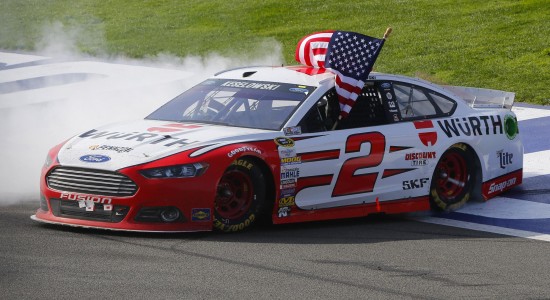 Brad Keselowski’s win at Fontana is his first NASCAR Sprint Cup Series victory of the season and 17th of his career.

“It was really an up and down day, for sure, but as a team and Paul and the guys on pit road kept fighting. At the end, we caught some breaks and made the most of the breaks we caught, and that was kind of the story of our race. It looked like we were probably gonna finish sixth or seventh there and then that yellow came out. We came in and pitted and drove up a little bit. And then caught another yellow and thought, ‘Now what do we do?’ So Paul made the call to come down pit road and put four tires on and when he said that I said, ‘This could either go really good or really bad.’ I didn’t know which one it was gonna be. Some guys stayed out. Some guys took two tires and all kinds of different strategies and on the restart we were able to find our way through the lanes and get to the front there and somehow end up in victory lane leading the last lap. That’s kind of a race car driver’s dream and this is one we’re gonna sit back and go ‘wow’ for a while on.”