OMSE team owner, Andreas Eriksson, led the test, placing an emphasis on developing his talented drivers. Ford OMSE drivers Andreas Bakkerud and Patrik Sandell both put the Olsbergs MSE Ford Fiesta ST through its paces on the snow and ice covered terrain. While the drivers main priority was testing in the car to prepare for the 2014 seasons, they still managed to make time for a little fun. The drivers and their Fiesta ST went head-to-head with not one, but two, snowmen. 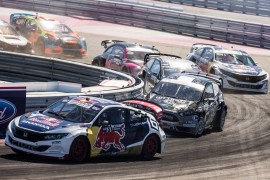