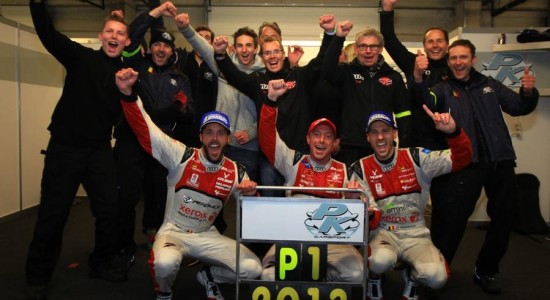 Belgian team PK Carsport will participate with two cars in the NASCAR Whelen Euro Series in 2014.

The drivers that will enter the Elite championship are the team stalwarts, Anthony Kumpen and Bert Longin. Both have been very successful in GT racing. With six wins Kumpen holds the record in the Zolder 24 hours, and he also conquered ten Belgian GT-titles, was FIA GT vice-champion and won the Spa 24 hours. Longin had a successful career in motocross, before switching to car racing. He won the Zolder 24 hours five times, took seven Belgian titles and seven wins in FIA GT. Negotiations for the driver line-up the Open championship are still ongoing.

PK Carsport is one of the oldest teams in Belgium. From the middle of the 80s to the middle of the 90s the team won several national and international championships in rallycross. When the team switched to circuit racing, PK Carsport was at least as successful. At the end of the 90s, the main focus went into GT racing. The squad won nine Belgian titles, seven Zolder 24 hours, as well as the Spa 24 hours. In 2009 the team became runner-up in the FIA GT Championship.

Camaro GT3 to roar in Monza!