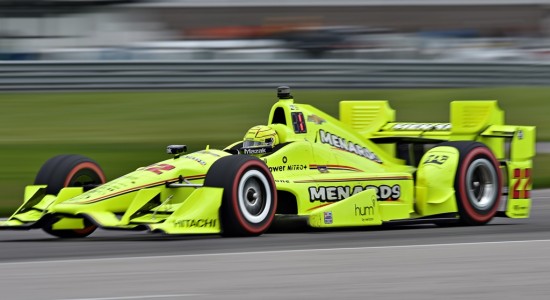 Simon Pagenaud is turning the 2016 Verizon IndyCar Series season into his launch pad to stardom.

The 31-year-old Frenchman dominated the Angie’s List Grand Prix of Indianapolis, starting on pole and leading 57 of the 82 laps around the 2.439-mile Indianapolis Motor Speedway road course to collect his third consecutive win this year.

Pagenaud became the first series driver to win three straight races since Scott Dixon won at Pocono and then both ends of the Toronto doubleheader to propel him to the 2013 championship.

“What a day,” said Pagenaud, who also won the inaugural Angie’s List Grand Prix in 2014. “Three races! It’s incredible to win three in a row like this and, here in Indy for me, it’s very special. I lived here for nine years so this place is very special in my heart.”

Pagenaud, in the No. 22 Menards Team Penske Chevrolet, finished 4.4748 seconds ahead of teammate Helio Castroneves. The key to victory came on Pagenaud’s final stop on Lap 63, when he entered and exited the pits with the lead.

Pagenaud has collected 242 points and hasn’t finished worse than second in any of the first five races. Reigning Verizon IndyCar Series champion Scott Dixon, who finished seventh today in the No. 9 Target Chip Ganassi Racing Chevrolet, is second in the standings with 166 points.

Castroneves was pleased with his runner-up finish in the No. 3 hum by Verizon Team Penske Chevy. It was the Brazilian’s 39th career second-place finish, second on the all-time list, and his 88th career podium, tying him with Bobby Rahal and Al Unser Jr. for sixth all time.

Practice for the 100th Indianapolis 500 begins Monday on the 2.5-mile IMS oval with rookie orientation and veteran refresher tests, followed by a session open to all entrants. Practice continues daily through Friday, with qualifying scheduled for May 21-22.