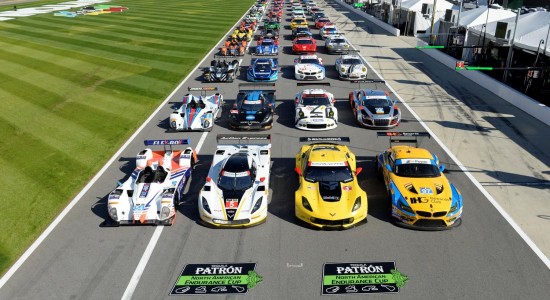 It’s that time of the year! The Rolex 24 at Daytona kicks-off the second season of the TUDOR United SportsCar Championship and with it, the motorsport year.

“The Rolex 24 At Daytona is truly one of the world’s most iconic endurance sports car racing events, as evidenced by the melting pot of drivers, teams and manufacturers entered for this year’s event,” said David Pettit, IMSA VP of Marketing. “More than half of the Rolex 24 field was born outside of the United States, each bringing its own unique fan base.” Of the 196 drivers entered for the Rolex 24, 117 drivers from 27 different countries were born outside of the United States. A total of 53 cars from 10 different automotive manufacturers will take the green flag.

At the Rolex 24 At Daytona drivers battle a compact 5.73-km (3.56-mile) circuit that combines a tight, twisting infield track with a high-banked tri-oval superspeedway. Taking place at a time of year when the nights are the long, drivers are in the dark for over 12 hours.

In PC Johnny Mowlem is on top for BAR1 Motorsport. In the GT classes Oliver Gavin completed an impressive lap to start his Corvette C7.R in front Gianmaria Bruni’s Ferrari and Pedro Lamy’s Aston Martin. The GTD pole position went to the 007 Aston Martin (fastest lap by James Davison).

The race starts at 14.30 EST on Saturday, 24 January and the overall winning car will travel some 2,500 miles (4,000 km) in the ensuing 24 hours – similar to crossing the United States coast to coast.