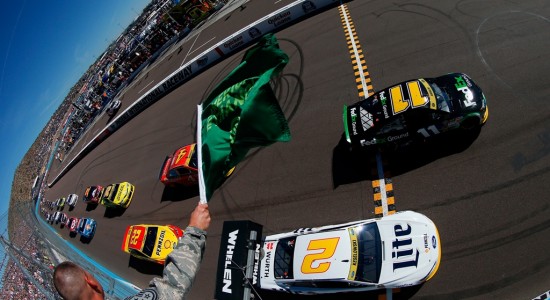 The Homestead-Miami Speedway will once again host the NASCAR finale, the Ford Championship Week, to decide who will win the Sprint Cup. This year more than ever the pressure is building up on the drivers before the Ford Ecoboost 400 due to the new Chase format. 16 drivers started the Chase but only 4 remain with the same possibilities of conquering the big trophy. Kevin Harvick, Denny Hamlin, Joey Logano and Ryan Newman all have yet to win their first Sprint Cup Championship. One will succeed this weekend!

“I think the biggest key for this whole scenario is you’re not behind. You’re on even footing with the other three guys” said Kevin Harvick during Media Day. He later added how the new Chase format is the best thing that has happened to the sport, bringing intensity for the drivers and fans till the very last race.

“Obviously it means a lot to be one of the Final Four, and racing for a championship is a dream come true” was the first comment from Joey Logano. ”When you get to walk through the [Team Penske] shop, you see a lot of the trophies and you see all the Indy 500 championship trophies there and all that, so it would be really cool to be able to add your name as a champion driving for Roger and Walt. I think that would be a dream come true on top of just winning the championship in general. For anyone, it would be amazing, but doing it for Team Penske is my goal.”

When asked how he would race one of his direct competitors for the Cup in the last laps of the race, Denny Hamlin answered: “I’ve raced everyone with respect. I feel like respect is something that’s hard to come by in our sport, but it’s not going to take someone wrecking someone to win this championship. You can do it without doing that.” He later added that the possibilities of teammates to help one win the championship are limited. He reaffirmed that wrecking somebody off the track, in his opinion, is not an option.

Ryan Newman, often called the underdog in the latest weeks, hopes everyone understands that in this Chase format you don’t have to win the race in order to have a shot at the championship: “Consistency has been our strength!” “We just haven’t been as successful [at winning races] as some of these other guys. But our consistency has been there, so we just have to be there at the end.” He then said to be very excited that such an important race in his career will be held at Homestead: “Homestead-Miami is the best racetrack to end the championship!”