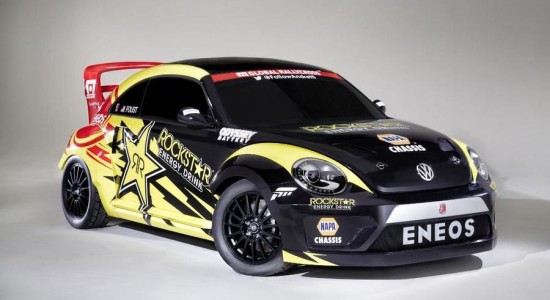 Volkswagen of America and Andretti Sports Marketing announced the details of its 2014 rallycross program. Volkswagen will partner with Andretti Autosport to form the Volkswagen Andretti Rallycross team, running two cars in the series for drivers Tanner Foust and Scott Speed.

The team will initially compete this season with modified Polo rally cars, built on the chassis that won the 2013 World Rally Championship for drivers and manufacturers, and will switch during the season to the fearsome GRC Beetle. This all-wheel-drive rallycross car is the ultimate expression of the third-generation Beetle and will feature more than 560 horsepower from its turbocharged and direct-injection TSI engine.

“Red Bull Global Rallycross is the perfect form of motor sports for a youthful, exuberant, and growing brand in the U.S. market,” said Michael Horn, President and CEO, Volkswagen Group of America. “We’re excited to partner with Andretti Autosport, one of the great names in American motor sports, and delighted that we will be running the iconic Beetle in the series.”

Michael Andretti, CEO of Andretti Autosport, added: “I’m thrilled to be entering the series, and especially happy about teaming with Volkswagen. We are excited about our driver lineup of Tanner Foust and Scott Speed; I believe we have the best drivers in the series and will be a top contender.”